Going on with reviews of inexpensive SVEN gaming devices, we couldn’t but take notice of the gamepad with a name speaking for itself – X-Pad. The device is pretty simple, but it’s distinguished among its competitors due to a number of features we’ll talk about later. X-Pad is intended mostly for casual gamers who set up high demands to functionality and comfort but don’t want to go into much expense. 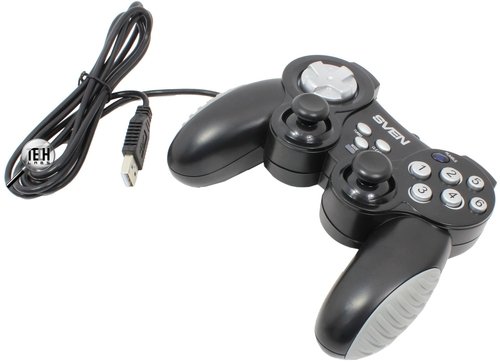 X-Pad comes in a stylish blister pack allowing to estimate the size, appearance and even ergonomics of the device without unpacking an operation manual and a warranty card. 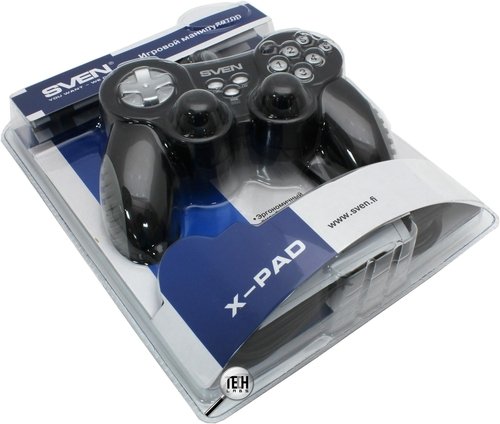 Let’s finally take the gamepad out. It’s designed in classical black and silver. Ribbed rubberized inserts on the handles immediately catch your eye. They serve for making the grip more comfortable and confident and, perhaps, for better palm ventilation. The rubber ribs are pretty high, so the area of contact between the palm and the device reduces (though it doesn’t affect grip force, as rubber doesn’t slip), and your palm gets vented. 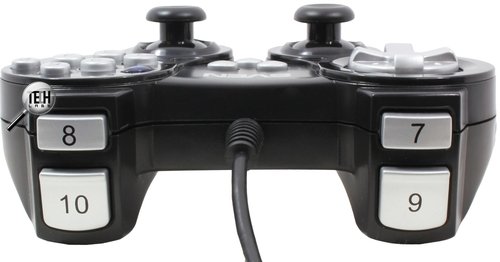 Controls are conventionally located. The silvery 8-position D-pad is placed on the left, and six silvery action buttons – on the right. These buttons are numbered 1 to 6. On the right, there is one more button: it’s responsible for another important feature of the gamepad – rumble, or vibration. Indeed, in games supporting this feature, the gamepad will provide vibration feedback by means of a built-in motor. When vibration is activated, Rumble button lights up bright blue. 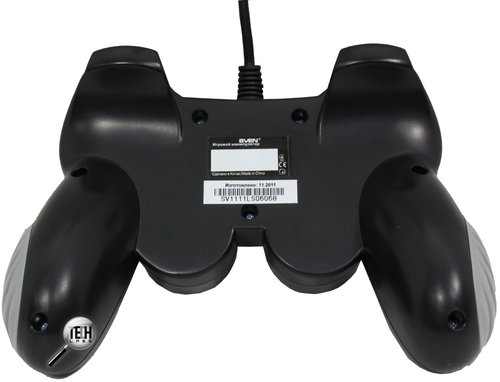 Finally, under the index fingers, you can find silvery triggers numbered 7 to 10. Due to their special shape, the triggers are easily found by touch. Three more buttons, not gaming but functional this time, are located in the center of the gamepad top panel. They’re Turbo, Clear and Mode. There’s also a square Turbo LED lighting up red or green, depending on the active mode. A couple of analog sticks are symmetrically located and conveniently deepened for the thumbs. They are bordered with funny-shaped limiters.

For SVEN X-Pad connection to a PC operating with Windows 7, installation of additional drivers from the included CD is optional. However, you can do it if you wish. All the basic setup is made mostly on Windows control panel or in a chosen game.

The basic requirement to a gamepad is to be “imperceptible” in the game, for the user not to get distracted because of sticking buttons and inconvenient joysticks. In general, SVEN X-Pad has no problem with it. The analog sticks move smoothly, the D-pad performs accurately, and takes intermediate positions precisely.

Vibration feature turns out very useful, as it’s supported in most games and, in addition to realistic effect, it bears certain information load, for instance, it can warn you when the enemy is approaching. The vibration has medium force, it’s enough in most cases. Turbo button provides continuous firing and other repeated actions. Sometimes it comes in handy, especially in arcades. And, after all, 6 programmable buttons instead of usual 4 can also serve a good turn, for example, in simulation games, to minimize keyboard use.

The gamepad – affordable and supplied with additional functions – complies with SVEN’s concept quite well. It’s ergonomic and high-quality, vibration feedback and Turbo mode operate well. A couple of additional buttons don’t confuse the standard layout but complement it. The LED mode indication is convenient and quite useful. Though the gamepad’s triggers are a bit too hard, it’s pleasant and easy to play with, and the reasonable price makes this device affordable to all fans of virtual battles. 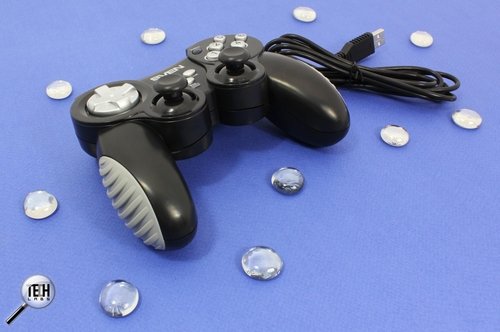